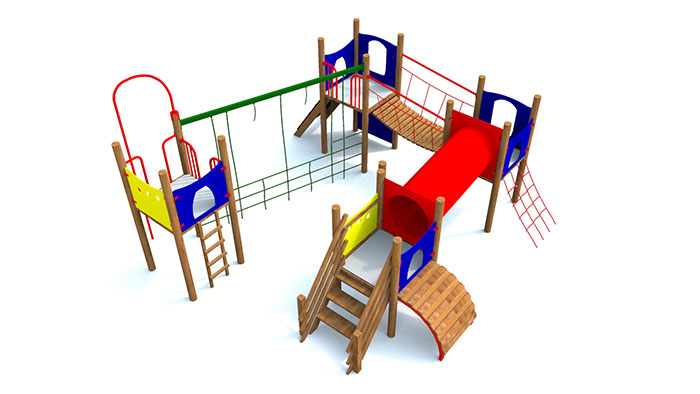 Crackerjack is a large multi play unit that engages children of a wide age range. Occupying 75m2 of space, and with a wide multitude of physically challenging activities, the Crackerjack is the perfect centrepiece to a playground or play scheme. The durable HDPE panels combine with the timber uprights to make an exciting and inviting climber, and shop/activity panels can be fitted beneath the taller decks to provide an imagination play aspect to the climber and create a more rounded play experience.

Decks are set at 900mm, 1200mm and 1500mm, and each deck is fitted with activities to suit a particular age group, to provide a steady progression in difficulty and excitement as pupils grow older.

The 900mm deck has simple steps and a barrel climber which leads via a crawl tunnel to the 1200mm deck. This has a scramble net and chunky rung rope ladder. A suspension bridge leads to the first of the two 1.5M decks which feature the hardest activities designed to suit the older age group. There is a rock climbing panel and steep ramp and rope to the first 1.5M deck which connects to the second 1.5M deck via a challenging rope traverse. The ‘reward’ at the second 1.5M deck is to slide down the fireman’s pole or descend via the vertical ladder.